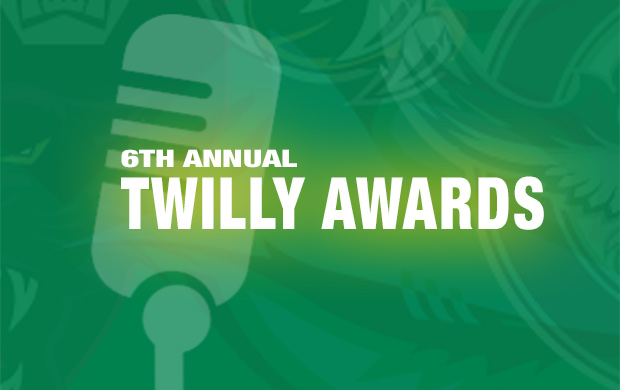 Given we’ve had a lot of growth in terms of audience numbers this year I thought it would be a good idea to talk about the TWILLYs and how things work.

The TWILLYs are our end of year awards, loosely modelled on the Dally M’s, but with many more categories that fit in with the style of This Week in League. Categories like Gronk Of The Year, Superfan Of The Year, and the highest possible honour this show can bestow – The Revelation Of The 2015 NRL Season.

For 5 years the format of the TWILLYs has remained the same. In 2015 it all changes. This year we’ll talk footy first, and present our 2015 Team Of The Year, as voted by #TWILNation.

Some awards didn’t make it this year. We removed the Video Referee Decision Of The Year award, for two reasons. One, Kane Evans try vs the Dogs was the worst of the year, and two, there’s so much negativity around refereeing, so who needs anymore on our night of nights?

We’ve added some awards. This year there’s a “Beard Of The Year Award”, and we’ve added a long overdue “Rookie Of The Year” award for listeners. There might even be some surprise categories. You’ll see.

You’ll note that each category has a place where you can fill in your own nominee for a category. Don’t have a cry if your favourite isn’t in the ones we’ve selected as our nominees. Grow a pair and put them in yourself – from past TWILLYs though, can I ask that you spell the name and capitalise it correctly? Makes it easier.

This year’s TWILLY voting will close at 6PM SHARP, QLD TIME ON FRIDAY, 30TH OCTOBER. You have plenty of time to vote. Results will be tallied by our financial partner Accountstar Accountants. We will not know the results until we rip open the envelope with the winner of each category. It’s a surprise to us as well.

This year’s TWILLY Awards will be livestreamed on UStream, as it has been the last couple of times. The livestream will commence at “about” 9PM on FRIDAY, 30TH OCTOBER and go for about two hours, give or take. We’ll be drinking, you’ll be drinking. The best stuff always happens when the show is going live.

A podcast of the TWILLY awards will be available a day or two after the live show has been recorded.

So, without further ado….. GET VOTING: https://www.surveymonkey.com/r/TWILLY2015. A random voter who fills in their details at the end will win a free 2016 TWILNation Membership for themselves, better odds than Lotto!

Published in The Podcast and This Week in League